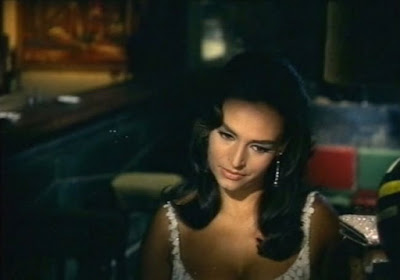 Diana Lorys is the professional name of a woman who was born as Ana María Cazorla Vega in Madrid, Spain in 1940. She appears to still be with us now. Next to nothing can be found about Lorys’s personal life or acting career, online or in print. But she’s worthy of notice, at least to certain types of film buffs.

Lorys’s list of movie credits is fuzzy but lengthy. She seems to have appeared in roughly 50 titles, many of them features that have never seen any kind of release here in the U.S., or made available to English-speaking audiences in any way. But many of the films she’s been in have enjoyed widespread distribution around the world, and several of them rate a viewing. In some cases, the pleasure that can be taken from the movies comes merely in the way of the inducement of campy giggles. Other times the most memorable aspect of the films is simply Lorys’s photogenic beauty, which is considerable. But some of the titles are actually quality material, usually in a cultish kind of way. 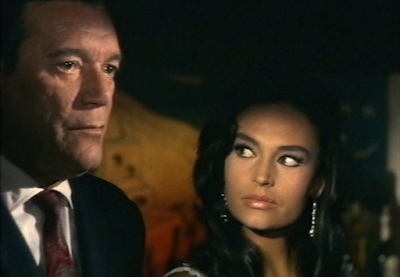 Lorys’s roles – which have been in titles that were made as recently as 2007 – have come in an impressively wide variety of film fare. While Westerns (generally within the Spaghetti and Paella subgenres) have been her mainstay, she has also lent her exotic attractiveness and fierce screen presence to silly spy thrillers, vampire movies, Mexican Revolution sagas, erotic horror cult classics, mad doctor romps, giallo-styled thrillers . . . She has been in films which contained entire casts of people nobody has ever heard of, but has also acted alongside the likes of Anita Ekberg, Robert Mitchum, James Mason, Gina Lollobrigida, and Lee Van Cleef. And while film awards committees can be forgiven for not nominating her for any honors for her screen performances, it has to be said that she consistently comes across as assured and convincing in these various parts. And she always looks great on celluloid. 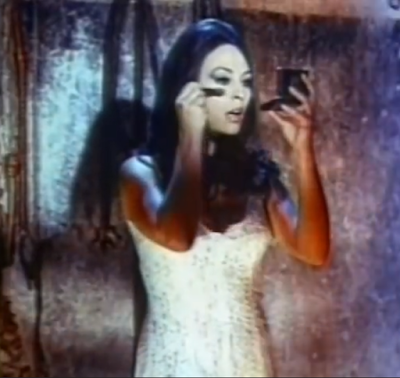 In the world of the B-movie enthusiast, Lorys is a leading light, albeit one who has been largely ignored, even by the people who usually appreciate the kinds of films in which she has acted. So it’s time to give Ana/Diana some love. Below are four movies she’s been in that can entertain fans of the afore-mentioned types of cinema fare:

Lightning Bolt (1965)
This one is to be applauded for pure camp value only. An Italian-Spanish Eurospy feature, it's a blatant James Bond ripoff and pretty light stuff. Yet it’s enjoyable in its own way, even if just for “OMG that's ridiculous” chuckles. A U.S. space program is having troubles, its rockets inexplicably blowing up during trial drills. The government suspects sabotage, especially when a leading space scientist working on the program disappears. They call in a sexy female special agent, Captain Patricia Flanagan, to oversee a secret mission to go in and find out who might be messing with the rockets. Lorys plays the curvaceous Captain, who always seems like she’s ready to reveal that she’s a practicing dominatrix in her spare time. She brings on a dapper, easygoing yet crafty, male Lieutenant – who happens to be her part-time lover – to work with her on the assignment. They encounter a diabolical villain who’s so much like Goldfinger, as to be laughable. This is a silly romp that the Mystery Science Theater guys could have a blast doing one of their riff sessions over, if they haven’t already. Captain Flanagan’s loverman/co-worker gets most of the screen time, but Lorys is the most potent presence in the trashy feature. 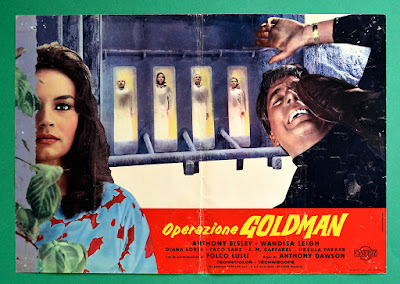 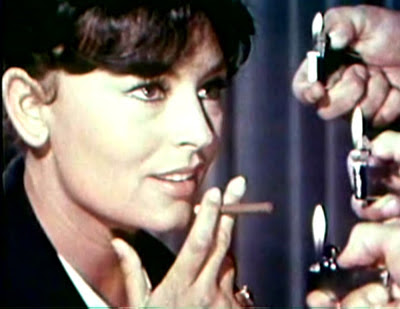 Fangs of the Living Dead (1969)
Goodness, how many vampire movies, retelling the same basic tale, have been made? This one, which sometimes gets called Malenka, didn’t do much to advance or transform the genre. But the Spanish-Italian feature, the first horror film made by Spanish director  Amando de Ossorio, is notable for a few reasons. One is the presence of Swedish starlet Anita Ekberg, in a mid-to-late career role that saw the former Fellini favorite slumming it. The other is Lorys, who is one of the prettiest and sexiest female vampires to appear on the silver screen. The story follows Ekberg’s character, who at the beginning is just a normal citizen of Rome, and who is about to get married to a handsome doctor. But she receives a letter informing her that she is a Countess belonging to such and such family, and she should come visit their estate to learn about her heritage. In the remote village, she gets schooled on the history of occultism among her ancestors, and she quickly gets told that they’re a bunch of vampires who want her to take her place in the family by becoming one herself. The doctor must try to reach the castle and save his bride-to-be before she becomes a member of the undead. Lorys plays a local, busty bar maiden who sprouts fangs and gets bloodthirsty in the wee hours.  The Hammer Horror company didn’t need to worry that this run-of-the-mill effort would threaten their hold on the vampire movie genre of the era, but the big name of Ekberg, and Lorys’s eye-pleasing screen presence, make it a worthwhile watch. 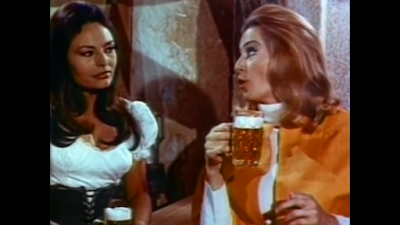 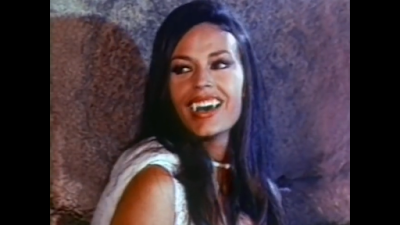 Nightmares Come at Night (1970)
Jess Franco (1930-2013), Spain’s cult hero exploitation filmmaker, is the brains behind this sexy and surreal thriller.  Franco was at his best when directing erotic horror films, and Nightmares Come at Night is among the better examples of this section of his CV. In the lead role, Lorys portrays Anna, an exotic striptease artist who does her act at a groovy nightclub. A beautiful blonde woman named Cynthia, played by Colette Giacobine, becomes a regular to come see the stripper’s act, and eventually befriends the woman. And then the blonde takes over the stripper’s life, first seducing her and then engaging her in a dominant-submissive relationship which Anna seems powerless to resist. Under the controlling Cynthia’s spell, Anna begins having violent nightmares that lead her to believe she may have murdered someone while not consciously aware of the action. A big plus in this title is the presence of the enigmatic Spanish beauty Soledad Miranda, a Franco favorite and one many know from her lead role in Franco’s cult classic Vampyros Lesbos. Miranda (who used her alternate film name Susan Korda in the credits) is only in a few scenes, yet leaves a lasting impression as a thigh-high boots-wearing accomplice in Cynthia’s schemes. This is must-see fare for any Jess Franco enthusiast. Like other examples of his best work, it’s both erotically titillating and mentally hypnotizing. Lorys proves here that she is much more than mere cinematic eye candy, as she expertly handles the complex lead role of a terror-stricken woman. 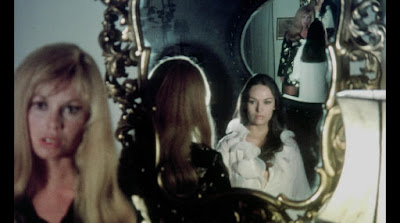 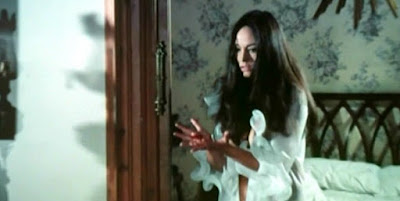 Blue Eyes of the Broken Doll (1973)
A Spanish-made thriller done in the style of Italian giallo cinema. Set in a small village in France, the story opens with a drifter - played by Paul "the Spanish Lon Chaney" Naschy - who wanders into the remote town and gets hired as a handyman at a house occupied by three sisters. It's a peculiar home. All three of the women are physically attractive, but all have issues. Lorys portrays the sister who takes on a motherly role with the other two. She's got a prosthetic hand as a result of a disfigurement suffered in some mysterious past accident. And she spends a lot of time fretting over her siblings. One of the other sisters is a nymphomaniac always looking for any excuse to throw off her low-cut tops, and the third is a wheelchair-bound neurotic who may have been injured in the same incident that damaged her sibling's hand. Life in the house is unsettled to begin with, with the muscular vagabond exciting sexual interest in Lorys's character as well as Ms. Hot Pants. But then the tension mounts to an unbearable point when everyone in town comes to realize that the handyman is an ex con who did time for a violent crime, at the same time that a string of gruesome and interconnected murders take place in the village. In keeping with the giallo films that inspired it, this feature contains slasher movie gore, artful camera angles and shots, and lots of beautiful people. It's as well done as many of the revered Italian thrillers from the era and genre. And Lorys, as she did in Nightmares Come at Night, shows through excellent acting that she's much more than just a beautiful face and voluptuous body for directors to throw up on the screen for visual stimulation. 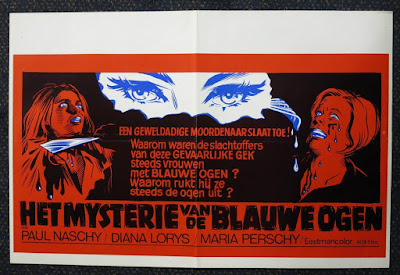 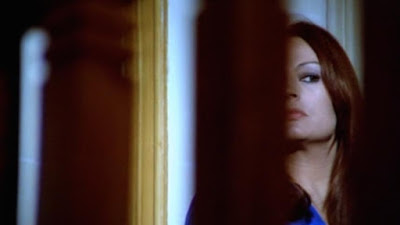 The Awful Dr. Orlof (1962) Said to be the first horror movie produced in Spain, this film launched the directorial career of the above-mentioned Jess Franco. A city is terrorized by a series of abductions of young, beautiful women. Several witnesses have seen two different men who could be the perpetrators, but even with vivid descriptions of both, the police are having trouble solving the terrifying case. A 22-year old Lorys has multiple significant roles in this serviceable gothic horror film.

Villa Rides (1968) Any movie that stars Robert Mitchum, Yul Brynner, and Charles Bronson, and whose screenplay was co-written by Robert Towne and Sam Peckinpah, has to be at least decent, right? Well, yeah, kinda. Pancho Villa’s story is told in a scattered way here, though, so much so that at times you feel like you can see the above-mentioned thespians wanting to say, “Do I really have to do this?” Lorys is only on the screen momentarily, but she is a winner as a gorgeous woman doing some flamenco-style dancing.

Superago and the Faceless Giants (1968) Masked superhero farce. Do yourself a favor and watch the Mystery Science Theater rifftrax version. Do I really need to describe the plot? Lorys portrays the alluring sidekick of the superhero’s (whom the MST guys accurately state looks like he came to a Halloween party as a Twizzler) nemesis. So-bad-it’s-good laughs abound.

Bad Man’s River (1971) A Spaghetti Western set in Mexico. The story is half comedy and half shoot-em-up drama. Lee Van Cleef, James Mason, and Gina Lollobrigida save a confused plot. Lorys has a small role but makes a large impression. 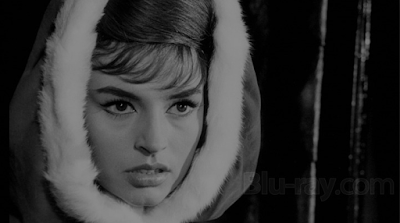 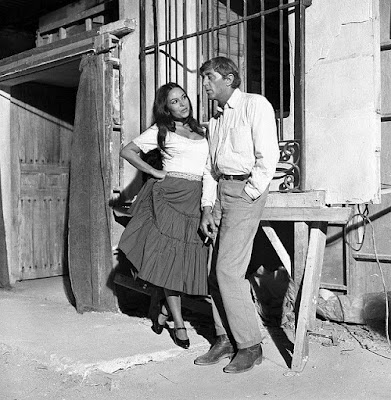 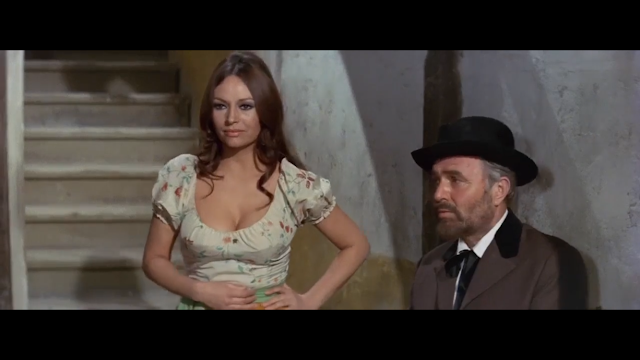