My Top I0 Publications to Date

My Top 10 Publications to Date

Since 2008, approximately 175 of my short stories, personal essays, and feature articles on books, music, and film have been published, in 28 different outlets. I thought it might be time to take a moment and reflect on all of this work, focusing on some of the more satisfying publications.

Being a freelance writer has brought me a wide spectrum of experiences. Some assignments have come off smoothly and exactly how, or even better than, I hoped they would. Others have not gone well at all, for a number of reasons. And some have come out pretty well in the end but weren’t a lot of fun during the process. It’s nice to stop for a second and think about some of the better experiences.

In doing my journalism pieces I have become acquainted with many interesting people. It would be hopeless to try and remember all of them. Musicians, people who work for record labels or who handle publicity for the artists and the labels; writers and people who work for publishing companies; filmmakers and actors . . . and of course the editors of the publications for which I’ve written. I’ve interviewed some musicians I greatly admire – Roky Erickson, Sky Saxon, Bernie Worrell, among others – as well as one of my all-time favorite people from the history of cinema: Mimsy Farmer. I’ve had one running column via which I’ve been able to write extensively about a cherished literary genre – noir fiction – and another one that gave me the opportunity to cover a collection of people/outfits who work in independent music releases, an endeavor I value greatly.

Ok, enough preface. Following are 10 publications that stand out to me as the most fulfilling assignments I’ve worked on to date:

Shindig! magazine of the U.K. is a publication for which I have written roughly 40 feature articles, in addition to numerous reviews. They are a music magazine specializing in covering underappreciated/outsider pop/rock/psychedelic/folk/soul, etc. music from the 1960s and ‘70s. At one point they were looking to expand their coverage of relevant film subjects, and when this came about, I immediately thought of one of my favorite cult movie people: actress Mimsy Farmer. I tracked Farmer down on the web and arranged a phone interview with her; this chat was easily the most interesting and enjoyable interview I’ve ever done with an artist. My article on Farmer was published in Shindig in 2009, and, at a later date, parts of it were excerpted in the British Film Institute’s Blu-Ray/DVD reissue of the movie More, in which Farmer stars.

(note: Shindig is a hard copy publication that does not post content to the web as a rule, thus no links to my pieces for them) 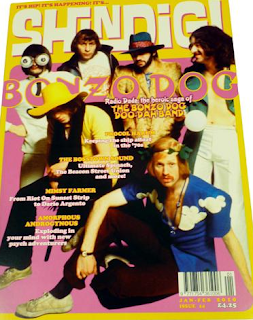 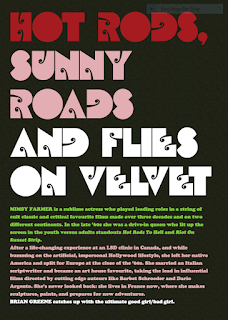 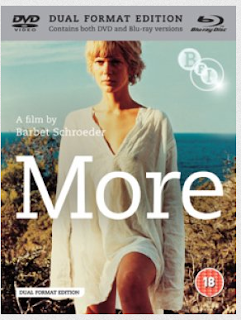 “The Notes” is a short story that I originally wrote many years back. In 2008 I revised it to enter it into a short fiction contest held by the Jerry Jazz Musician web site. JJM is an online culture magazine that covers things like classic jazz music and literature, and they hold a quarterly short story competition. “The Notes” won their competition in the summer of 2008. 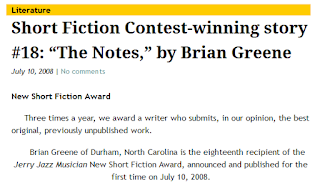 link to the announcement and story

Macmillan Publishing’s Criminal Element blog has been my biggest publishing outlet mainstay in recent years. I have written 72 pieces on crime fiction and crime and cult films for them. Criminal Element’s focus is crime/suspense fare, on TV, in literature, in the movies, in comic books, etc. and in everyday life. I have had, and continue to have, an enjoyable working relationship with them. About one third of the pieces I’ve done for the site up to this point comprise a series called Lost Classics of Noir, in which I write appreciations of worthy, undervalued works of edgy crime fiction. 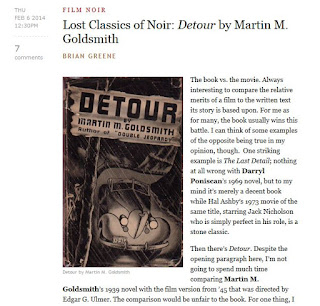 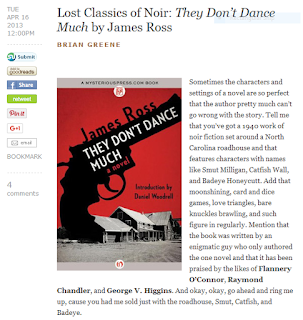 link to all of my pieces for Criminal Element

Ted Lewis was a groundbreaking and influential crime fiction writer from England, who wrote mostly in the 1970s. He authored the novel that is the basis of the acclaimed film Get Carter. Lewis is a hero to many noir fiction aficionados, but far from a household name, even within the broader world of crime fiction and the people who follow the genre. I did extensive research on Lewis’s life and work and wrote several articles on him, for a variety of publications and from a variety of angles. The piece I did on him for Criminal Element – my inaugural article for the site – is the one that best sums up the end results of all my research. 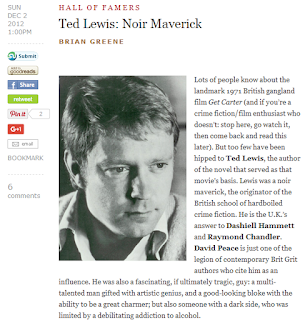 
Garage in the Movies

In 2009, Shindig! produced a special issue/paperback book, called Psychotic Reaction, that focused on American garage music made in the 1960s. I contributed three features for this release, and one of those was one of the more enjoyable and satisfying projects I’ve worked on thus far: I wrote a feature on American garage bands who had scenes in cult and camp movies from the era. 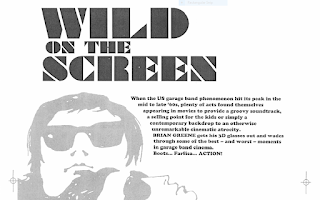 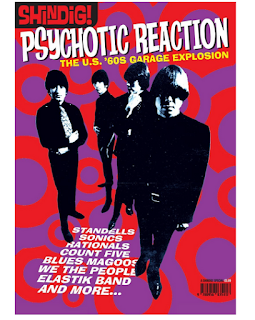 This one goes back to 2004. Susan Jacks is a Canadian vocalist who was once a member of the psychedelic pop group The Poppy Family, along with her then-husband Terry Jacks. The Poppy Family are a band I love, and I knew they were also appreciated by the editor of the music magazine Scram, for which I was doing some writing at the time. I arranged to interview Jacks for Scram and the piece went up on the publication’s web site. Even though it is only a Q&A piece with a very brief intro by me, and thus not a thorough work of journalism as are most of my feature articles on artists, this one stands out to me because I thought Jacks’s answers to my questions were interesting and because, to my knowledge, there was no other article in existence at the time in which Jacks reflected on her career and her time with The Poppy Family. 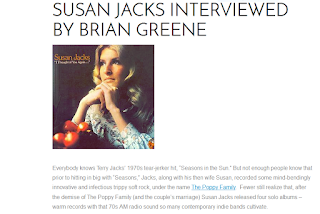 link to the interview

Mulholland Books is a crime fiction publisher that also runs a webzine. In 2011, I wrote a piece for their site on American crime fiction author George V. Higgins. Higgins’s first novel, The Friends of Eddie Coyle, is one of the finest and most lasting works of edgy crime fiction, and it’s far from his only worthy book. I wrote a rundown of Higgins’s literary work, focusing on his belief in using an unusually high amount of dialogue in his novels. I got an enormous amount of positive feedback about this one.

link to the piece

A little earlier this year, I contributed an article on American noir writer Malcolm Braly to the Literary Hub web site, which is run by Grove/Atlantic.  Braly was a man who spent most of his adult life in prison, and who wrote his first novel, and most of his second, from behind bars. In this article I focused on how his life as a con impacted his efforts as an author. This project stands out for me because it was my first for Literary Hub, which has one of the larger reading audiences for which I’ve written.  I hope to do more pieces for them in the future. 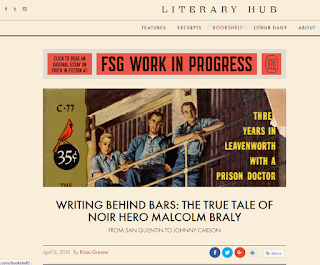 In 2011, Shindig! started a new regular column called What’s in a Label?, each installment being a profile of an independently-run music label that produces releases of interest to the magazine’s readership. I was assigned to write the first of these and I did it on Seattle, Washington’s taste-making reissue label Light in the Attic. After this, the editors asked me to make this column my own. Other writers for the magazine eventually penned some of the installments, but I wrote the first 10 or so, and ultimately did 12 of them. I covered indie reissue labels from all over the world and who released lost gems from a variety of music genres. I think the best of my What’s in a Label columns was that first one, on Light in the Attic. 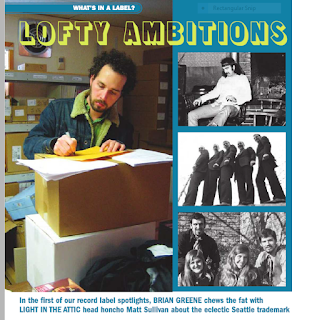 John Trinian was a San Francisco-based writer who penned a series of high-quality, grossly overlooked novels in the 1960s, most of them in the noir vein. His 1964 title Scandal on the Sand is one of my favorite works of fiction, by anybody in any genre. Trinian was also an intriguing, ne’er-do-well kind of man in his daily life. I wrote a feature article about his life and work, some of this content coming about via a phone interview I did with his daughter. This feature will appear in a book anthology of writings about beatnik and pulp literature, called Beat Girls, Love Tribes, and Real Cool Cats: Pulp Fiction and Youth Culture from the 1950s to the 1980s. The book will be published by Verse Chorus Press this fall. 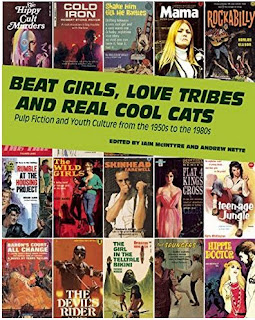 Amazon listing of the book